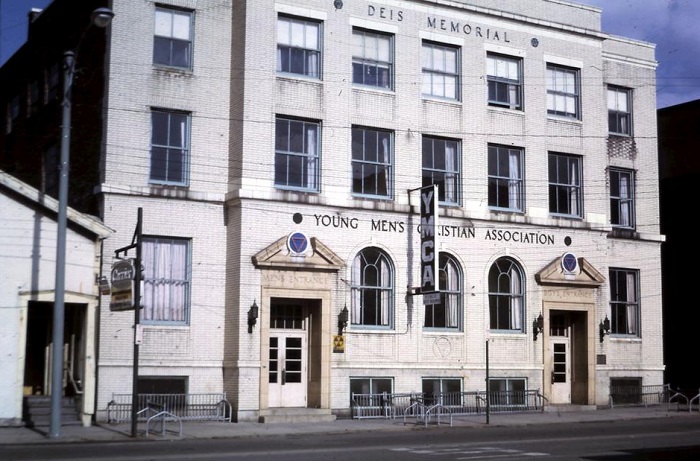 The Tuscarawas County Young Men's Christian Association was first organized in our county on December 29, 1919 by a small number of forward-looking men. Its primary purpose at that time was to assist and aid the churches in the community in social and religious education. Its first meeting location was above the Bruck's Hardware store on West Third Street in downtown Dover. During the next ensuing years its members met in four different locations in Dover, but still with a very heavy religious influence.

In the mid 1920's the active members came to the realization that if the YMCA was to grow in membership and programs, particularly among youth, it must provide facilities that would attract young people and facilities that would emphasize the physical as well as the spiritual aspects of personal development.

Through community subscription, but primarily through the generosity of Andrew Dels, funds were raised for the construction of a YMCA building on North Tuscarawas Avenue in Dover. This building was built and dedicated in December 1928 at a cost of $135,000.

After a succession of General Secretaries (Executive Directors) in the 1920's and 30's, the YMCA was fortunate in January 1944 in securing the services and experiences of Miles Durr. He held that position until June 30, 1966. Because of his leadership and guidance, the growth of the YMCA during this period was strong and steady. In June 1949, Tom Patton joined him in this endeavor as Physical Director. The two men working together brought imagination and enthusiasm to the YMCA membership, with a special emphasis on youth. Growth resulted in an ever-growing membership and participation by the community, and the vital need of a growing Christian voluntary organization.

Hundreds of volunteers played a very significant roll in program development, membership growth, building expansion, and financial stability in the 1950's, 60's, and to the present time. For this the YMCA will be forever indebted. Volunteer service gave opportunity beyond our wildest imagination.

In 1967, Attorney M. Paul Redlinger prepared the documents for the YMCA endowment fund, which was registered with the Attorney General, State of Ohio on January 19, 1968. Paul made the contribution to activate the fund.

In the mid 1960's, it became evident that the old building could not adequately accommodate the growing membership and the people desiring to take advantage of the programs offered. A new and larger building was essential if the YMCA was to continue to serve and meet the needs of the community.

In 1969, under the able and determined leadership of John Marsh Sr., a capital campaign was undertaken to raise money for a new YMCA. The campaign raised a total of $1,325,141.

Even while the fundraising campaign was in progress, the YMCA Building Committee, under the very able leadership of Robert Kappeler, was engaged in plans for a new building. The land for the YMCA's present location was a 10-acre site between Dover and New Philadelphia. Ground breaking was held on May 24, 1970. The YMCA building was paid in full in March 1974.

With the new location and facilities, the YMCA's membership and programs continued to grow and service to the community increased. The outdoor facilities were developed between 1975 and 1985.

In 1988, two additional acres of land were secured making the YMCA campus 12 acres. Playing fields were developed. In August 1989, Tom Patton, Executive Director, retired after 40 years of service to the Tuscarawas County YMCA.

In 1994, again because of membership growth and participation, another capital campaign was conducted to build another gymnasium, remodeling the existing building. John Marsh Sr. served as honorary chairman while Brenton Kirk Jr., and John Hoopingarner chaired the Phase I campaign and Tom Patton chaired Phase II. A total of $2,200,000 was raised and the Tom Patton Center was completed and dedicated in the fall of 1997. The Mary Hanhart Chapel was constructed as part of the Phase ll construction, made possible by the Richard Hanhart family. An additional parking lot was added in 1998.

Executive Director Keith A. Lands started April 1, 1995. Membership more than doubled by 1989 and the budget now exceeds one million dollars.

In 1999, the Phase III Campaign was started under the able leadership of John (Jack) Marsh Jr. This campaign raised $554,000 and made possible the expansion of the YMCA Wellness Center and indoor track.

The Tuscarawas County YMCA has a proud past and a very bright future as it continues to be a community partner building strong kids, strong families, and strong communities.

YMCA CEO Tiffany Foxx, who joined the team from July of 2017 to June of 2022 before
moving on to the YMCA's of Greater Cleveland as the VP of Operations.

On December 29, 2019 the Y celebrated it's 100th year with a historical timeline mural created by the support of
Jane Gingrich (YMCA Board Member), Faith Patton (daughter of the late Tom Patton), and Retired Excecutive Director
Keith Lands. Due to the Covid-19 pandemic the YMCA anniversary gala scheduled for spring of 2020 and other special events
throughout the year were cancelled.

During the search for a new CEO, retired CEO Keith Lands returned to the Y as Interim CEO from June 2022-October 2022.
On October 31, 2022 Meagan Shaheen became CEO bringing a wealth of experience and energy from her YMCA career with
the Akron and Canton associations. 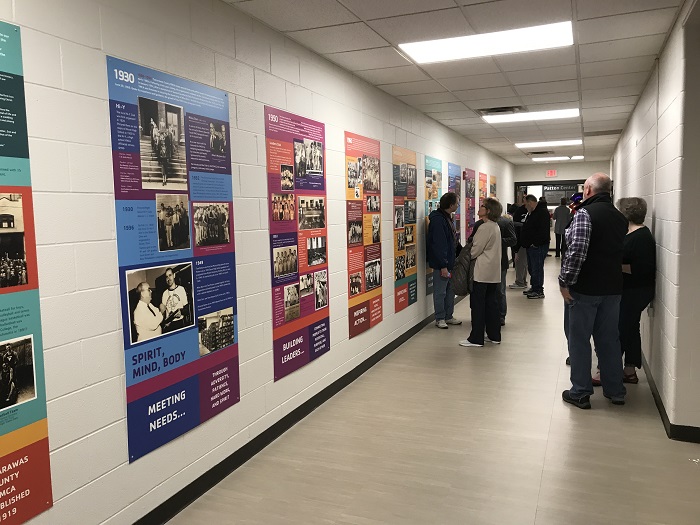